As the first Cat equipment assembly unit to be established in South Africa, the new facility marks a significant milestone in the partnership between Caterpillar and Barloworld Power, its southern African dealer for Energy and Transportation.

The generators are supplied in kit form and assembled locally from scratch, contributing to the drive for localisation and enabling the transfer of new and valuable skills to South African employees. This also enables the Cat units to compete on a more even footing with locally manufactured equivalents.

“We are now assembling Cat branded generators at our Boksburg, Gauteng, premises that have the same highest quality standards for which Caterpillar is renowned worldwide. Barloworld Power can now offer truly competitive Cat products while aligning with government objectives in local employment and development."

“This initiative between Barloworld and Caterpillar promotes localisation and leverages our excellent capabilities to provide a local solution for South Africa," adds Chris Monge, Caterpillar area manager.  “This represents a significant investment in the local economy to support our growth strategy in the power business." 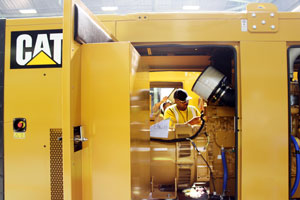 The assembly unit was set up with the assistance of experts from Caterpillar's power systems assembly factory in India and is being managed and staffed by Barloworld Power. Initially the facility will assemble the Cat i6 and 400 series generator sets, ranging from 400 kVA to 1 000 kVA and suited to the provision of standby power for medium to large industries. Barloworld plans to produce about 500 units a year, expanding according to market demand.

The first two pilot 550 kVA generator kits, supplied by Caterpillar in China, were sold before they arrived in South Africa. They were assembled and delivered by Barloworld Power in the last week in February 2015.

The team operating the assembly line has been supplied by the Barloworld Power Customised Solution Centre in Boksburg and received specialised training from Caterpillar's international experts to assemble Cat generator sets.